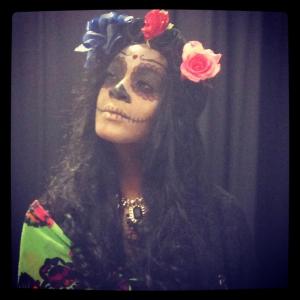 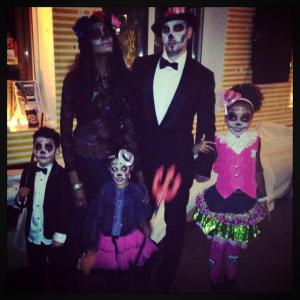 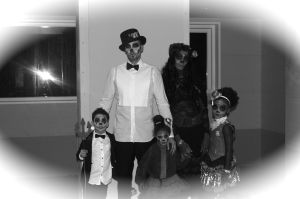 The winter holidays has begun and it all starts with Halloween. A holiday that they celebrate in the states but thankfully found his way out here.

The kids love to dress up and luckily for them so does mummy. If a party has a theme I get all excited, and I take my task to execute the theme very serious.

Last Year I chose to dress up like Catrina , one of the most popular figures of the Day of the Dead celebrations in Mexico (Dia de Muertos) . Ofcourse I dragged the whole family in my theme and everybody was excited except for Morgan, he doesn’t like scary faces and preferred to go as Iron man or some superhero. But seeing me painting his sister face finally won him over.  Since I have a family of five which I consider a pretty big family I have to work with a time schedule, so what I did is put all the outfits ready the night before. First I painted my own face and then one after each other,I gave myself 15 minutes to paint a face while my husband was dressing a kid. Worked perfectly.

About the costumes. Alex wore his wedding tuxedo and so did Morgan, I borrowed a high top hat from a friend and added some fake roses on it. India wore her birthday dress and Sifare had on her monster high costume she once got for Christmas. The little hats came from a cheap chinese store and has totally nothing to do with the theme, I just wanted to create some extra drama.

I think my outfit was also pretty easy an old lace skirt and a lace bodysuit. I bought one of those flowerheadbands and added some extra. I found a lace scarf at the primark and that was that. It was easy and cheap didn’t spent a lot its all about painting the face right and having my beautiful family to show it.