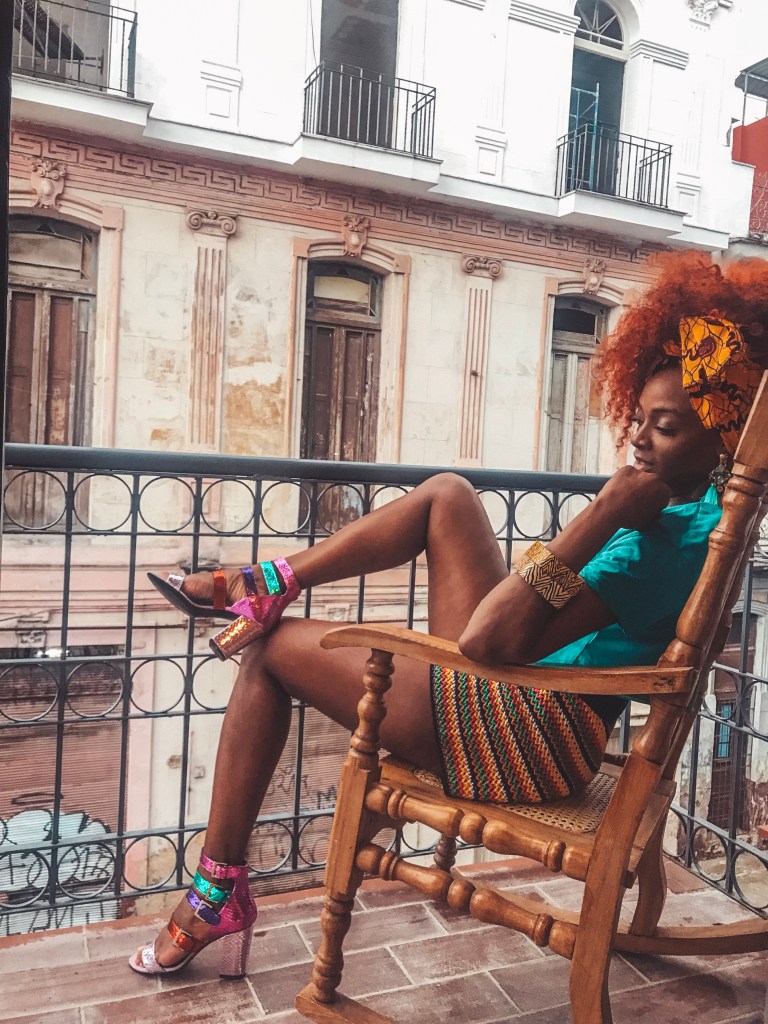 We booked our trip to Cuba quite spontaneously because we wanted to experience the island before big changes were implemented. It’s beautiful to witness a country evolve in so many ways. Some of the positive changes include citizens being permitted to own property and operate private businesses. This has provided the island with some awesome trendy restaurants and stunning B&Bs. The growing access to the internet also allows young Cubans to get inspired and expand their creativity. Prior to this trip, many folks attempted to warn us about “bad food and accommodations”, however to our delight we encountered tons of gems which led us to have a great experience all around. I have found that venturing out with an open mind and positivity leads to the universe reciprocating it back. Limited web access forced us to simply engage with people and share personal experiences. Aside for the first 3 nights, our remaining 1.5 weeks in Cuba flowed organically in such a way that we couldn’t have planned it better if we tried.

It’s important to start by highlighting how super friendly and helpful residents are. We stayed it what’s referred to as the “old center” of Havana which where most locals live, work and congregate. Despite the fact that it had a worn-down demeanor and poverty was visible, I felt safer in that neighborhood then I do in some streets in my own hometown of Amsterdam. 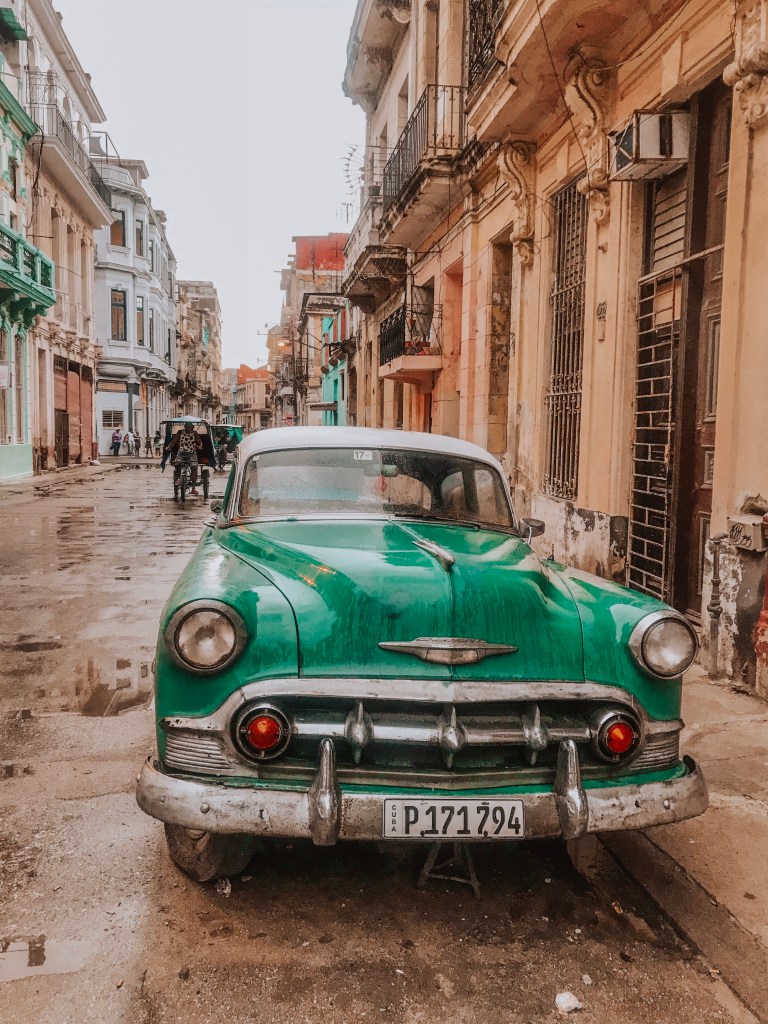 Our first night was spent at a Bed & Breakfast named Animas303. This quaint lodging possessed a few 2-person bedrooms, lounge with breakfast area and a cute rooftop. It pretty much felt like home at an instant. The guys who own and operate it welcomed us with open arms and one of them was on sight at any given moment, 24 hrs a day to help us with whatever we needed. We were met with great energy, no matter the time!

Yordan, Ernesto, Eduardo and Tony you are the sweetest and I will never forget you guys!! 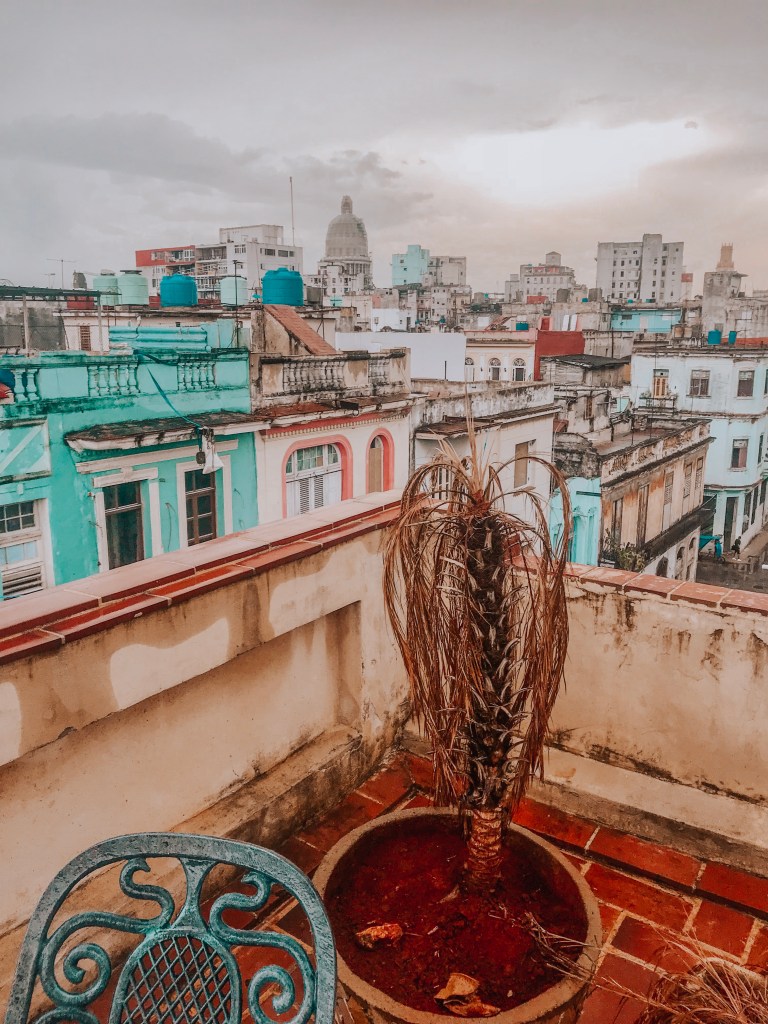 These same guys also owned another establishment called Industria33 (found on the street by the same name). This is a large 2-bedroom apartment, with 2 bathrooms and 2 roof terraces. We spent a lot of time lounging in hammocks with a drink in hand.

On our first day we booked a walking tour through the old town with Tony where we learned a bit about the history of the city. It was a great way to see Havana’s layout, which made it easier for us to find our way around afterwards.

The next must do thing was renting a classic car with a driver. They can all be found parked in front of Hotel Iberostar Parque Central. We chose a red Buick convertible which at that time matched our outfits perfectly. 50CUC got us around for an hour. During this time, we visited Plaza de la Revolution  , the amazing Havana Forest and Nacional de Cuba Hotel(famous mafia hotel). It felt like we were in a classic movie. Truly an incredible experience! 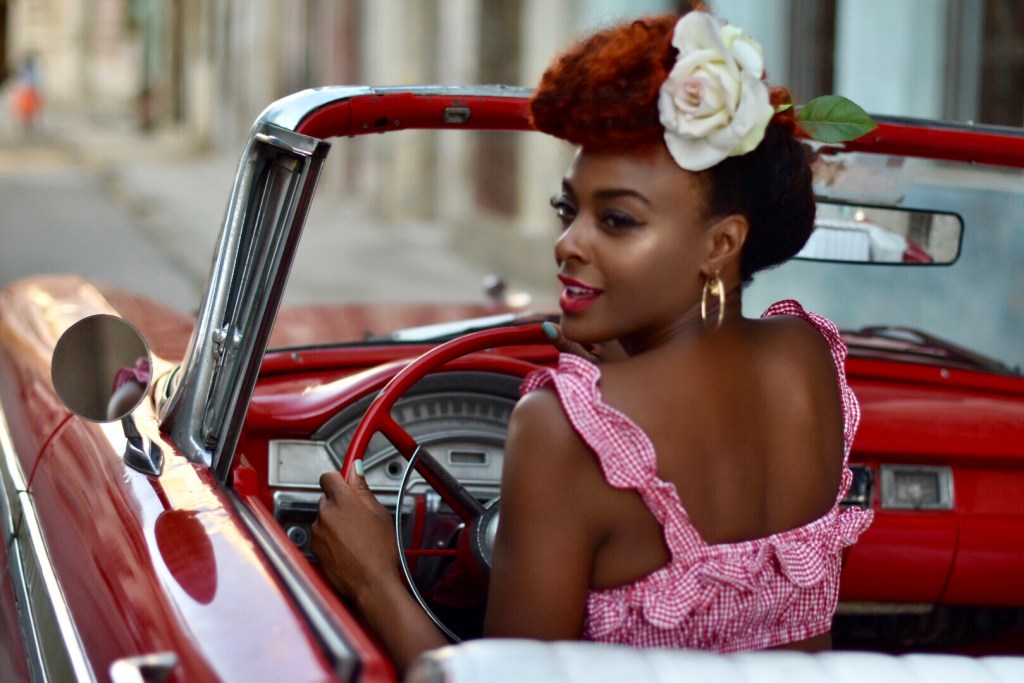 Unfortunately, our beloved B&B Animas303 was fully booked after our 1st couple of nights. We received a great tip from a couple we met and ended up staying at Capitolio Residences (Industria 412) for a night. After which our host Claudia helped us book our trip to Vinales.

We spent one night in Viñales and stayed at  Casa Arianna (Adela Azcuy 47). We made this 3 hour ride trip by what’s referred to as “taxi colectivo”. A taxi that shares the costs among all the passengers. We simply couldn’t resist testing it out! Other forms of transportation to Viñales include the bus 14CUC or a private taxi for 120CUC.

Once at our destination we were taken aback by how breathtaking this place is. Aside for its picturesque mountains, this region is also known for producing the best Cuban cigars. Thus, our first stop had to be a local tobacco farm where we learned how the leaves are harvested, dried and rolled. After which we were invited by the farm’s charming owner for some local coffee with rum paired with honey tip cigars. Mind you, all of this was done on a horse! 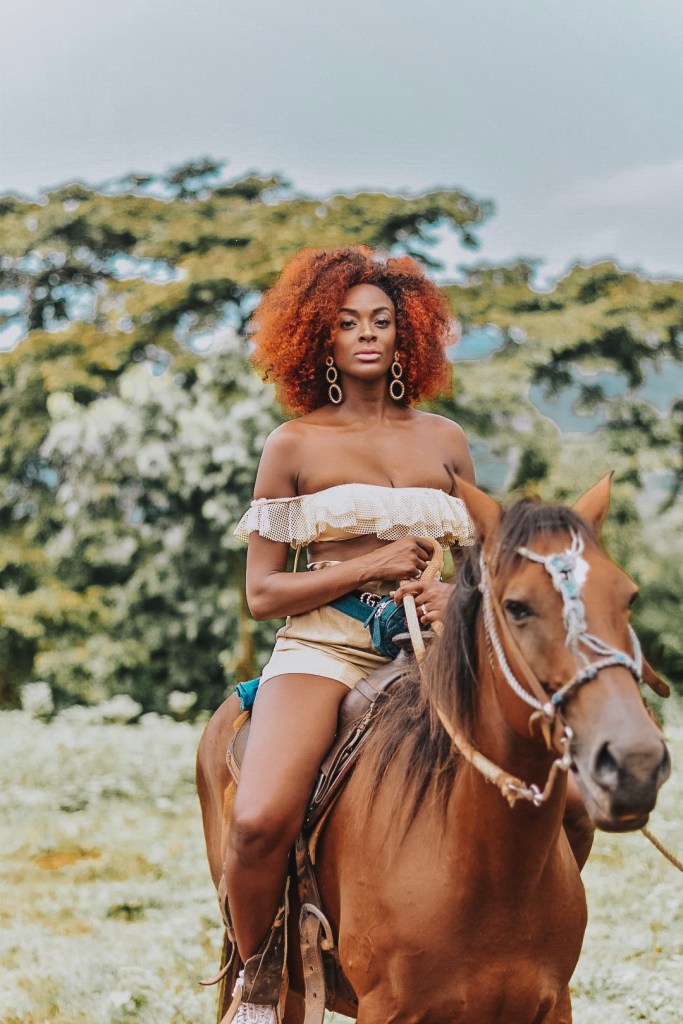 We stayed at a cute casa in Vinales owned by a man named Pedro. His neighbor by the same name (btw, “Pedro” is as common as Piet, Pete or Peter) is a real cowboy with 3 horses of his own. He was kind enough to take us for a ride to a natural pool. However, my neighbor neglected to tell me that Lucero doesn’t take commands from anybody . The picture above was taken when my horse decided to pause beforeas running through the fields. Lucero decided to munch on some farmer’s crops, at which time Pedro yelled out for me to instruct him to stop. As we discovered my commands are meaningless and at this point I rather be Lucero’s friend than his enemy. By the end of the journey, my horse and I were the best of friends. I guess all that quality time we spent and me allowing him to snack at will brought us closer together. I can also report that my horseback riding skills have grown dealing with him!

Following our trip to Viñales, we returned to Havana for 2 nights at Industria33. It was time to recharge and prepare for our next excursion à Trinidad, Cuba. 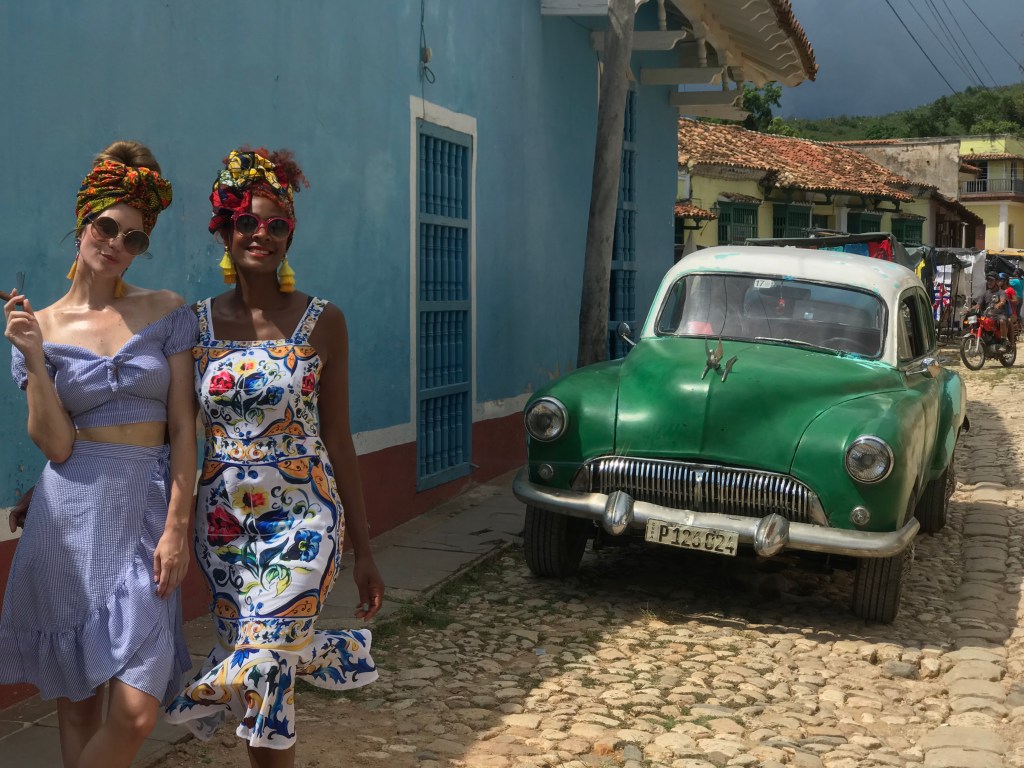 Trinidad is a common place to visit while in Cuba. This monumental town was once considered the island’s commercial heart. It now offers a window into the past. It’s beautiful cobblestoned streets can only be navigated by donkeys or horse and carriage. We took what ended up being an intensive hike up to the waterfalls. Well worth the stroll despite being exhausted for the rest of the day. However, we weren’t going to end our day without going clubbing inside of a cave! The road to it was dark and tad scary, but good times kicked in upon arrival.

Needless to say, the following day called for some R&R. What better place to unwind than the white sandy beaches and crystal-clear waters of Playa Elcon. This lovely beach possesses cute restaurants with delicious fresh fish.We stopped at a lovely beach resort beach in Varadero on our way back to Havana. Fun to sneak it in, but definitely not a must since to me it didn’t have a Cuban vibe. We ended up only staying there 1 night.

Once back on the island’s capital, we returned to our favorite home away from home, Casa Ánimas303. We ended our trip just as lovely as we started.

Dining and hangout recommendations in Havana:

By far my favorite lunch/dinner place. Make sure you get seated on the rooftop where the owner Wilson can spot you and give you tickets to a secret party. Not to mention the beautifully tasty cocktail, lobster pasta and ceviche which is to die for.

The average waiting time is 30min. It’s located across a “WIFI park”, so you can easily pass the time surfing the net (which is still a luxury in Cuba). The food is fresh, tasty and only 5CUC per meal and 2,50 for one of the best pina coladas in town.

Live music. The waiter taught me some basic salsa steps.

La Guarida.
Less traditional yet still exquisite. The restaurant is located on the 3rd floor of the building, and you must climb a dramatically winding staircase to get there. It’s such a cool location. Their tuna tacos were my favorite and the amazing view of the city is the cherry on top.

Another great spot with live music.

Marea terrace restaurant.
The only restaurant in Havana with a private beach. Order the lobster. It is delicious. 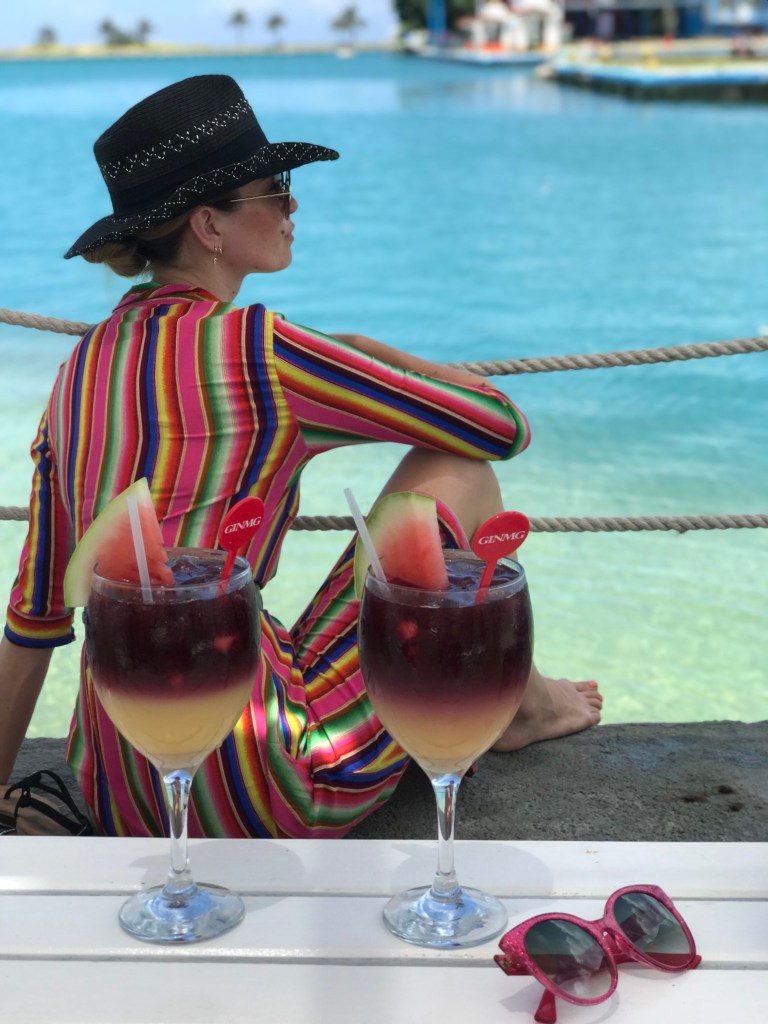 Cuba can be as cheap or as expensive as you make it. I spent an average of 80CUC p/d (incl. accommodation and trips). We integrated some fancy restaurants and a beach resort during our stay, but one can definitely get around for less.

Cuba has a great night life ask around to see what’s going that night. We liked The Hair factory which has art, live music and ends the night with a Dj!

I hope you enjoy Cuba just as much as we did!